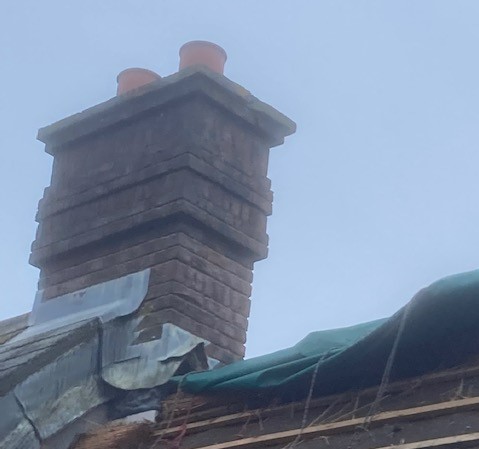 Quantum Chimney Services Ltd were engaged by The Purbeck Thatcher, working on behalf of a local housing association, to undertake an on site safety inspection, to assess the current stove / open fire and flue system installations along with the chimney structures in three tenanted thatch properties constructed in the early 1990’s, nr. Dorchester, Dorset.

The remit of our attendance on site was to:
• Assess the safety of the existing installations to ensure compliance with the building regulations had been achieved.
• Assess existing termination heights from the thatch material.
• Assess distance to combustibles from the internal flue wall to the external face of the masonry as it passes through the thatch.
• Provide advice on types of suitable cowls / terminals upon the chimney pots.
• Advise on any other related matter that could be considered to improve the safety of the appliances, flue systems and chimneys in relation to the thatch.

On entering the properties, a non-intrusive safety inspection was undertaken of each installation. It was observed all fire openings were constructed for use as open fires, utilizing standard 18” tapered fire backs and served by a 200mm / 225mm internal diameter proprietary flue system, with standard 460mm wide by 520mm high openings. In two of the properties, metal plates have been retrospectively installed across the front of the opening, to allow an enclosed wood burning appliance to be positioned in front of the original openings, with a rear exiting flue utilised to connect to the appliance and pass through a hole in the metal plates.

The issues observed with this method of stove installation were:
• No gas tight seal was formed between the connecting flue pipe as it passes through the metal plate.
• The appliance needs to be disconnected and pulled forward to enable sweeping access.
• No documentation was provided to show that after each annual sweep on repositioning the appliance and connecting flue, a new gas tight seal was formed and the necessary recommissioning of the appliance had been undertaken and documented.
• The original tapered fire backs had not been removed, resulting in the rear flue connecting pipe being positioned less than 75mm from the face of the fire back; all ‘products of combustion’ therefore were not being directed into the flue system itself but at 90° onto a solid surface.

Even more worrying than some of the issues observed above, was the incorrect positioning and fixing of carbon monoxide alarms. It is a requirement of the building regulations that all solid fuel appliances must:

Furthermore;
2.36 The carbon monoxide alarm should be located in the same room as the appliance:

(a) On the ceiling at least 300mm from any wall or, if it is located on a wall, as high up as possible (above any doors or windows) but not within 150mm of the ceiling; and
(b) Within 1m – 3m horizontally from the appliance.

With the issues surrounding gas tight seals not being formed observed, the incorrect fixing and positioning of a carbon monoxide alarm could have potentially fatal consequences for the tenants. One was found positioned resting, not fixed, on a door frame over 4m from the appliance and within 75mm of the ceiling while another was found sat on a coffee table.

In regards to the property with the open fire, there was no issue observed regarding the construction of the fire opening and associated flue system. The tenant did report however, difficulties with lighting of the fire and the need to reduce the opening to get the fire going. As the fire opening size to flue sizing was observed correct, this leads to the suspicion that poor provision of combustion air may be a consideration. On locating the air vent into the room, it was observed a secondary cover had been placed over the original vent cover, effectively sealing any air from entering the room. This has potentially dangerous consequences as a lack of combustion air leads to incomplete combustion and the potential for (i) an increased build-up of bituminous deposits, soot and tar to form in the flue system, in itself a an increased fire risk and; (ii) the risk of the products of combustion spilling back into the room leading to a risk to the tenants.

Lastly, in all three properties, no notice plate was observed fixed in any of the suggested locations dictated in Approved Document J. Again, it is a requirement of the building regulations that:

While we were able to visually ascertain that proprietary sectional lining systems had been installed, the lack of notice plate meant we could not definitively determine the type of system (clay / concrete), when and who installed it or what the designation of the flue system is.

External Assessment
There were two external chimneys to assess, both of which were shared chimneys, one housing two flue systems to two of the thatch properties and the second housing the flue system from the third thatch property and the adjoining slate roofed property.
As the properties form part of a larger terrace built on a hillside, the ridge heights step up on each property meaning the flue termination height is greater on the lower side ridge of each chimney compared to that on the higher side.
As no safe working access had been provided the chimneys were assessed from the working platform at gutter height. By taking chimney measurements it was ascertained that there was no less than 200mm from the internal flue wall to the external face of the masonry, therefore the need to create a break by installing A1 rated fireboards maintaining a 40mm air gap between the thatch and chimney is not required.

It was possible to estimate that the termination height, taken from the top of the of the chimney pot to top of thatch (denoted by retained lead saddle) would exceed 1800mm on two of the flue systems but the third, the central of the three properties assessed, would likely require a new taller chimney pot installed to achieve this.
Upon each of the three associated chimney pots, a terminal had been installed. One a spark arrestor, two top-guard cowls. It is now acknowledged that spark arrestors represent more of a risk than they do aiding prevention of a fire and their removal is strongly recommended. It is also worth noting that there is actually no mandatory requirement for the installation of a cowl, indeed, BSEN 15287 states that documented test evaluation of a fire and flue shaft performance must be undertaken before a cowl is installed and after, so that documented evidence can be shown that the fitting of a cowl does not cause issues with the safe working operation of a combustion appliance and flue system.
Furthermore on thatch properties, in the event of a chimney fire, it is good practice to ensure any sparks or lit embers can be projected as far as possible from the thatch material to reduce the risk of them landing back on the thatch and causing ignition, therefore the only type of terminal considered should be a simple open topped bird guard.

For all three properties, when visually assessing the chimney pots that they were not of a large enough diameter to have received the lining system through to the top of the chimney pot as would be expected although it was not possible to confirm this on site. The issues this causes are that the top section of the flue shaft is uninsulated and can form a cold spot. This will reduce flue gas velocity and cool the flue gases potentially to a point where they reach dew point and condense.

It is the condensing of flue gases and lack of flue gas velocity that causes the formation of bituminous material and soot to the inside of the flue wall, which itself represents an increased fire risk.

Summary of advice provided in report
On completion of our safety inspection, we offered the following advice to both the thatcher and landlords of the property:

It must be understood that while any advice or recommendation offered is given in to increase protection to both the property and occupants and reduce the risk of harm occurring,
there is no regulatory body which can enforce the changes required to meet current levels of compliance on the property owner unless works are undertaken which fall into the definition of building work stated in Approved Document J.

Chimneys and flue systems are ‘Controlled Services’ in accordance with the Building Regulations 2010 (2013 amendments) and Part J of the Building Regulations with combustion appliances irrespective of fuel supply referred to as ‘Controlled Fittings’. Any works to a ‘controlled service’ or ‘controlled fitting’ are defined as ‘building work’ and are therefore notifiable to the local building authority.
We re-iterate the importance of noting there is no regulatory body which can enforce change on a homeowner tov meet current levels of compliance unless physical works to the appliance or flue system / chimney are undertaken.

Internal assessment advice
• Carbon monoxide alarms to be correctly fixed and positioned immediately.
• A proper testing programme for the carbon monoxide alarms be put in place, using calibrated gas which engages the censor, not just from merely pressing the test button which only serves to test the alarm circuitry.
• The provision of combustion air is to be more thoroughly assessed and a new means of introducing sufficient air agreed, that will not cause discomfort to the tenants through draft meaning a likely probability of the vent being covered. Potentially the installation of Titan vents to replace the trickle vents in the double glazed window units.
• Consideration given to the manner in which the two stove appliances are installed, so that a method incorporating sweeping access without the need to disconnect and remove the appliances can be used.
• Consideration given to undertaking a CCTV chimney inspection of the flue system, to ascertain its condition and suitability for continued use

External assessment advice
• The immediate removal of both the spark arrestor and top guard cowls from the three flue systems.
• Installation of open topped bird guards to the chimney pots.
• Potential replacement of chimney pots to, (a) ensure necessary chimney termination height is achieved, and; (b) the flue systems can be extended through to the top of the chimney pots.

The safety inspection identified a number of potential fire risks that can now be easily dealt with while the re-thatching is occurring externally and a number of more severe risks to the tenants which can be addressed internally.

The safety inspection service allowed the client to put in place further measures which in the long term will protect both the property and the tenants and also provided general advice allowing checks in addition properties to be undertaken.

If you believe any of the issues addressed in the case study above are applicable in a property you own, please contact us.